With a beautiful picture perfect view like this on Lake Conroe, the last thing you want to do it to alter it in anyway, but you want to reduce the heat and glare coming into your home.  So now you are at a crossroads because you can’t it both ways.  You know that a choice will have to be made. You will have to sacrifice either your views or some of the benefits window film can provide. Actually in this instance you can have it both ways.  By choosing the best of the best – Huper Optik DREI Window Film.

This film will reduce the harmful UV rays up to 99%.  Reduce the solar energy by up to 60%.  Reduce the unwanted sun glare coming into your house by up to 64%.  This huper optik film will protect your furnishing, flooring, and artwork from the dangers of unfiltered sunlight.  All while not distorting your view but instead being so crisp and clear that you won’t be able to tell there is a films installed.  Just take a look at this close up photo of the same window. 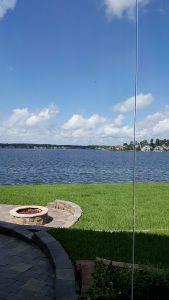 After the install was complete, the customer said how impressed she was that our installers could make the glass look like it was made that way!  This customer also said that she never realized how much she squinted until after we install her window film, because she was no longer having to.  So now I ask you, what is stopping you from having window film installed on your home?  You could be enjoying all the benefits of residential window film – just make the call!