Why Do I Need Safety & Security Window Film

Let me ask you a question – which would you rather have protecting you? The glass with security film or the untreated glass?

Like an invisible shield, security films offer protection from broken glass when accidents occur at home and at work. When annealed glass breaks, the shattered pieces can cause serious injury or even death. Engineered with powerful adhesives, safety & security films reduce the hazard of broken glass by keeping the pieces together & safely attached to the film.  Don’t be like to dog in this picture, at risk for possible injury due to a broken glass door. 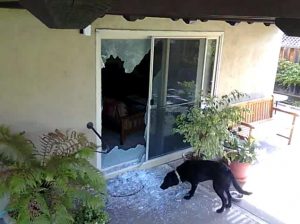 We all know that when Mother Nature loses her temper, devastation & loss is sure to follow. Glass is always one of the first casualties during a hurricane, tornado or severe storm. During violent weather  wind, rain & flying debris can cause the glass to break.  This gives anyone full access to your home or business. This can cause additional property damage and/or destruction.  Safety & Security films help prevent entry of wind-borne debris, providing superior protection 24-hours a day. Disasters can strike with little or no warning, but a security film are always ready. 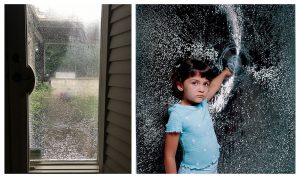 The photo on the left is from a customer after an attempted break in at her home. Windows & glass doors are the most vulnerable parts of your home or business. They are points of entry for criminals & smash-n-grab thieves. Glass is an easy target for vandals intent on mischief or worse.  Security systems are helpful, but provide little protection from experienced or determined intruders. With security films, intruders can’t easily break the glass, even by striking it with a heavy object. Usually they become discouraged & move on to an easier target.

A Few Facts about use of Security Window Films:

After repeated impacts to the same area, films can begin to tear due to the edges of the broken glass fragments penetrating the thickness of the film. This means that, in general, although films can help greatly by reducing glass hazards upon initial impact. With repeated impacts they may not continue to perform as well.  We recommend that once a break or impact has occurred to have the existing film removed & replaced to ensure proper protection.